The sky’s the limit for lift revamp project 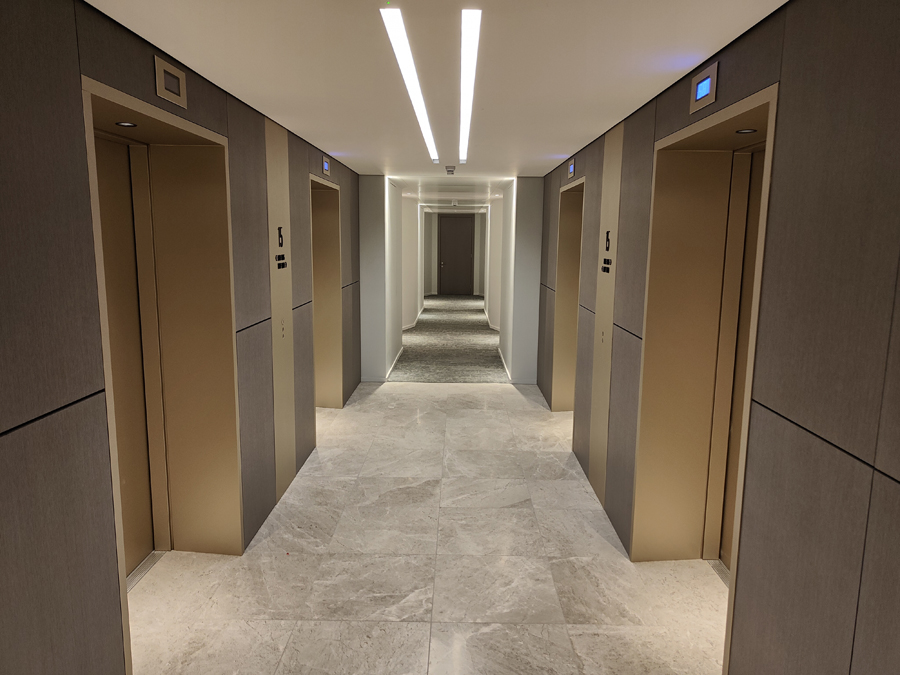 Nothing says opulence like a touch of gold, and when you are building London’s latest high-end, high-rise apartment block, opulence is the name of the game.

The 200m high, 58-storey Newfoundland apartment building, at the forefront of Canary Wharf, is the newest addition to the capital’s skyline, heralding the area’s move to the residential market after decades of commercial growth.

With one, two and three-bedroomed apartments for rent, the complex offers residents uninterrupted views across the capital. Tenants can enjoy a terrace, fully-equipped gym, lounge, self-service bar, private dining room, screening room and children’s play area, alongside all the benefits of living in the vibrant city.

With prices starting at £1,928, tenants expect a certain level of finish on every level – lifts included. 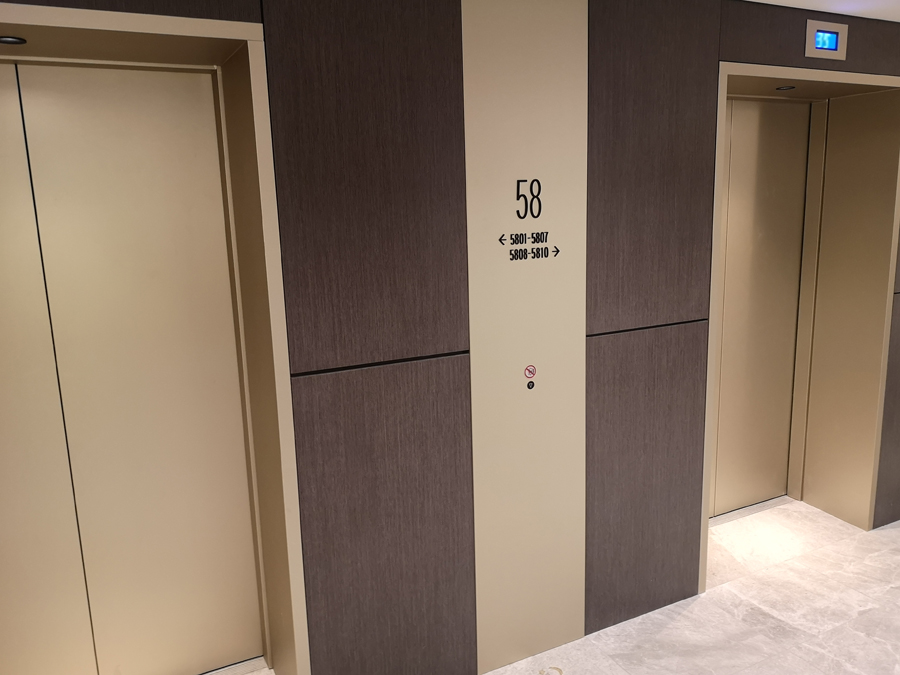 Commercial decorating contractor E Poole was looking to create a subtle gold effect on each of the 220 lifts, covering 55 floors, in keeping with the complex’s luxurious feel.

It was agreed in advance to wrap the lifts with vinyl, an easy-to-use, time-efficient option to create the desired effect with the minimum of fuss.

After a demo installation, the work was awarded to Omnia Vinyl Ltd, a Swindon-based company specialising in lift car, lift landing refurbishments and advertising.

With four passenger lifts on each of the 55 residential floors of the Newfoundland, that meant four entrances, four indicators and two full height call button panels required wrapping on each level, using 1,536m of 3M DI-NOC, to create the desired effect.

And as if the scale of the project wasn’t enough, the client had an unmoveable deadline; all work needed to be completed in just 35 days.

Gareth Watkinson, of Omnia Vinyl, said: “The client had already chosen PA-046 from the 3M DI-NOC Architectural Finishes range, and so we were asked to carry out a demo installation wrap on site.

“Following the high-quality completion of our trial installation, we were delighted to be chosen as the company to take this lift wrap project forward.”

Given the size and scale of the project, Gareth and the team decided to break the installation down into three phases.

Phase one involved all surfaces that required no interaction with the lifts themselves, such as architraves, indicators and landing operating panels.

Phase two focused on the lift entrance frames, wrapping two lifts at a time while phase three involved the wrapping of the lift doors, with technicians working on two at a time while the cars were being controlled by onsite OTIS engineers.

The first two phases were started simultaneously, with a completion target of 15 days, which was met, thus keeping phase three on track, for which a 20-day target was set. 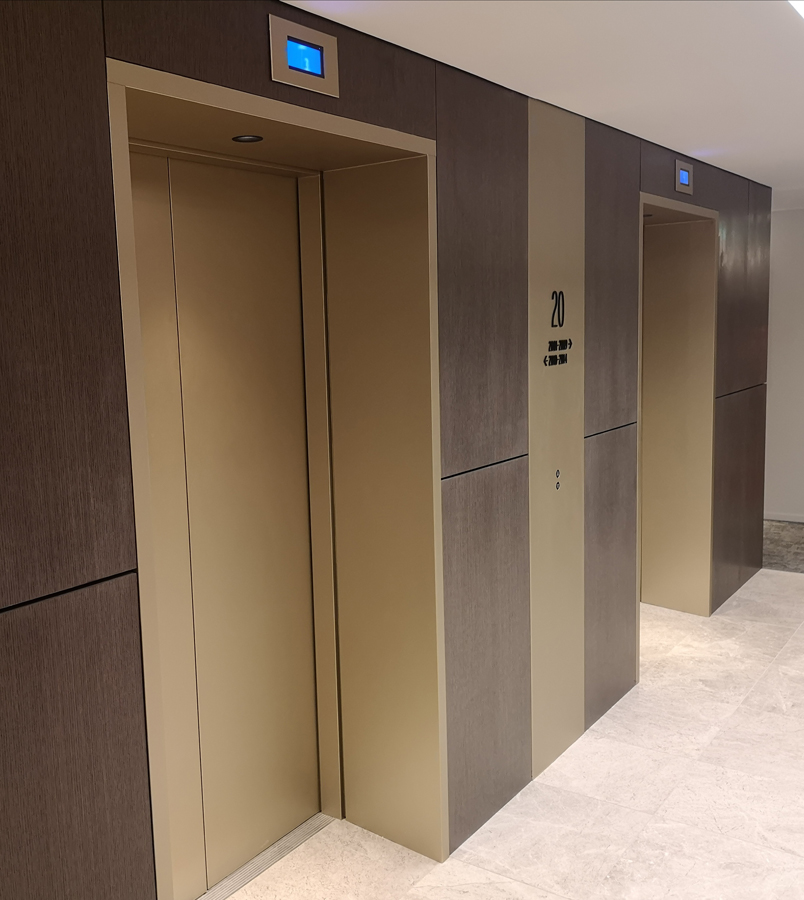 Gareth added: “In the end, we completed the door wrapping in 18 days, all while working with the OTIS engineers to ensure their own programme of testing and commissioning ran to schedule.

“This meant the whole lift wrap project from start to finish was delivered two days ahead of the agreed 35-day accelerated programme, which speaks volumes about the product used.”

Jack Carr, marketing executive at the Barnard Castle-based firm, said: “In this application, the product really has delivered from a number of different angles.

“Firstly, it came up trumps in the trial install of this project; not only was it performed well by the skilled installers, but the quality of the film was also impressive enough to be chosen to be used in such a high-end location.

“The design capabilities of this product also really came to the fore. With up to 1,000 finishes to choose from, we knew that the client was unquestionably going to find what they were looking for with DI-NOC. We were right, and pattern PA-046 fit the client’s design needs perfectly.

“Finally, we can’t forget about the speed of installation. The flexibility and ease of application allowed for the team at Omnia Vinyl to complete this staggering install inside 35 days.”

The project was a runway success, with the building opening for residents earlier this year.

A representative from E Poole commercial decorators added: “Many thanks go to Omnia Vinyl Ltd, who provided a superb quality finish and a great team to work with on this stunning project.” 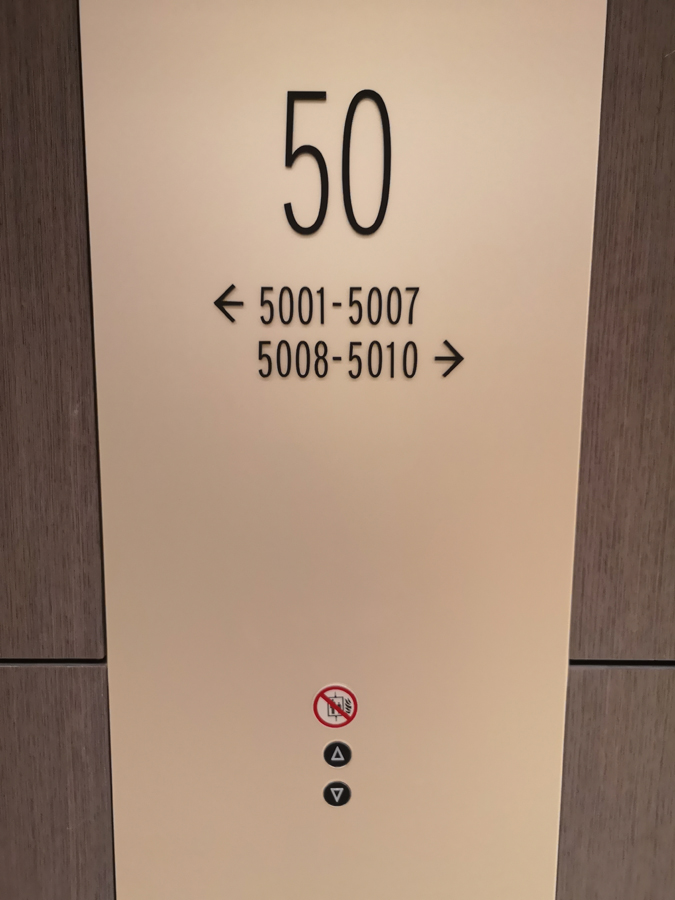 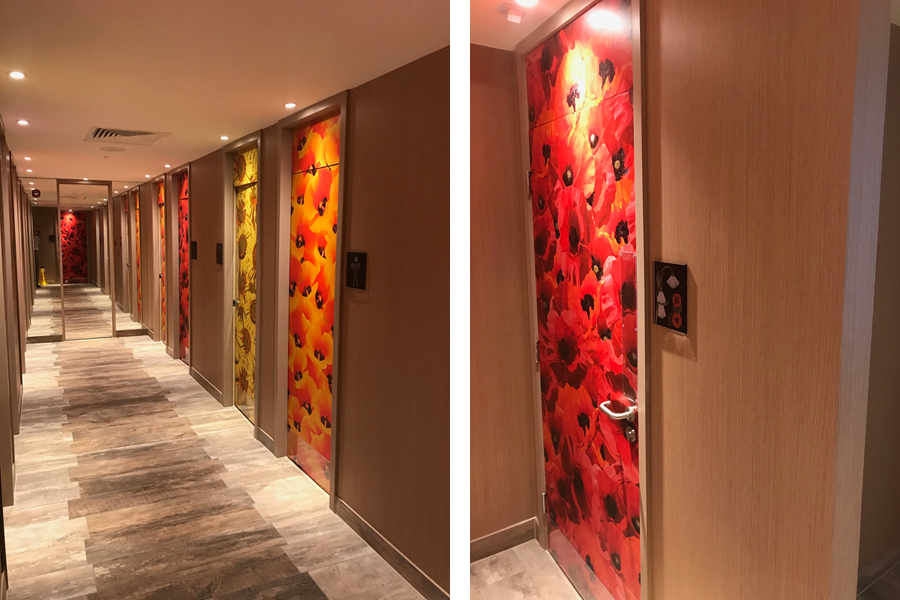 A spectacular installation project by Lustalux Ltd has helped to enhance the interior...